This was a lighthearted episode, appropriate since it introduces the jolly Falstaff to the podcast. Our next episode is going to be about Shakespeare as a fictional character à la the film Shakespeare In Love.

If you would like to see the Welles film Chimes at Midnight, it is available on YouTube Here. I know YouTube is less than ideal, but there are legal issues that prevent it from being released for sale.

We also endorse this film of Henry IV. I couldn't find it on Amazon, so I am providing the link through NetFlix.

Listener Sarah was cool enough to nominate us for a podcast award, you can see the other nominees and vote for us Here.

Shakespeare In The News:
This came out after we finished recording, so I'm just including the link here: This episode of NPR's Talk Of The Nation includes a segment about bringing Shakespeare to other settings and time periods.

Store:
This is the new version of Bryson's Shakespeare: The World As Stage I mentioned in this episode
Shakespeare (The Illustrated and Updated Edition)

This episode was a labour of labour. We had to record it twice, and it required a lot of research. Please enjoy!

The news story about Edward III being attributed to Shakespeare can be found Here.

Our next episode is Henry IV, Part I.

For those of you interested in reading more about the Spanish Armada, this is a great introduction to every step of the conflict, from beginning to end.
The Armada

The Merchant of Venice is a great play, and we were happy to do an episode about it, at a fan's request. Some good outtakes at the end of this one, too.

There's some interesting news about the attribution of Edward III in the Shakespeare canon, but it broke just as we finished the episode. We'll cover it next time.

We'd be really pleased if a listener would request the subject of the next episode as well. In fact, any sort of comment really brightens our day.

This one is quite short. There's not much to say about plays Shakespeare probably didn't write, it turns out.

I mentioned the speech by Thomas More that's possibly handwritten by Shakespeare. Wikipedia has a picture of the text in question, and here is the text of the speech, which I think is worthy of Shakespeare: (More is discussing the possibility of expelling immigrants from England, and trying to get the people to sympathize with their plight.)

. (I'm rather surprised, it's a very thorough story of Shakespeare and his legacy up to today, but it's selling for less than 5$.)

To put this quote in context, William Henry Ireland had been fraudulently generating Shakespearean documents, encouraging a cottage industry in false documents. In this spirit, The Telegraph published this humorous "letter" from William Shakespeare to his friend/opponent Ben Jonson:

The Comedy Of Errors

It's been a while, we know, but we did it again. This time, it's The Comedy Of Errors. We disagreed on how good the play was this time. (It's pretty funny).

How Shakespeare Got To Us

It's our tenth episode! I honestly didn't think we'd make it this far, but we're doing great! We have more listeners everyday, and they're from all over the world. This episode, about how Shakespeare got to us, is less than half an hour, but it's good.

You can read the First Folio through this link for HTML, and this page has scans, but I warn you, it is tough reading with few of the helpful details that get us through Shakespeare today, like naming characters, and modern English.

As always, there are some books you can purchase through amazon,

The Book of William: How Shakespeare's First Folio Conquered the World

Posted by Carsonist at 7:14 PM No comments:

Our latest episode is about Richard II. You can get it here.

Here's a video of Richard II made by the BBC.

Since recording the Podcast, I've seen all of Slings and Arrows, and it's fantastic. If you don't want to buy it, you should go to the library, or do whatever is necessary to see it. Highly recommended.
Posted by Carsonist at 11:23 PM 1 comment:

This is a short episode, we mainly did it so we could cover some ideas that we hadn't talked about previously. I hope you like hearing about Iambic Pentameter!


Links to what we talked about today:
Performance of Hamlet with 4 Hamlets
A collection of words possibly invented by Shakespeare
Metal Shakespeare
Zombie Hamlet
The Shakespeare Wars: Clashing Scholars, Public Fiascoes, Palace Coups

This Review is pretty good
Posted by Carsonist at 2:28 PM 2 comments:

We had a lot of technical issues with recording this one, so there may be some audio problems; to be honest, you're lucky we got this out at all. I guess we should have said we were making all these mistakes on purpose, so as to be true to the play.

Here is the so-called "Peacham drawing", we see what is probably, from the left, two soldiers, Saturninus, Tamora, two of Titus' sons, and Aaron.

If you do some examination, you'll find that this can't be a single scene from Shakespeare, and must, therefore, be a combination of characters from different characters and scenes.

Like we mentioned in the podcast, now you can go to Amazon through this site. If you buy the stuff we link to, we will get a percentage of the sale. It'd be a help to us, but don't feel like you have to.
Titus, Starring Anthony Hopkins

Here's an informational episode: Shakespeare's life. A little shorter than a usual episode.

Check it out Here. 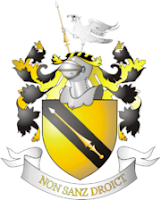 Shakespeare's Coat of Arms, courtesy of Wikipedia
Posted by Carsonist at 5:43 PM 2 comments:

We had some technical issues with recording this one, but we managed to salvage an episode out of it. You can listen to it Here.

As promised, we have pictures of the performance we went to, and links to sources you can look at.

The Genre Issue
Three_Unities
Wikipedia on The Tempest
The book that has the sheet music. It starts on page 20. 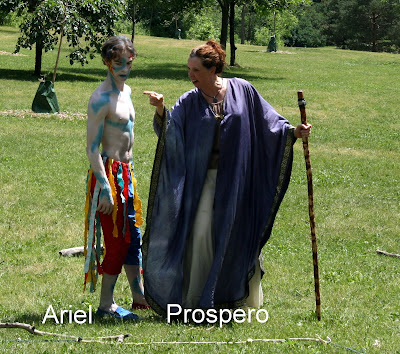 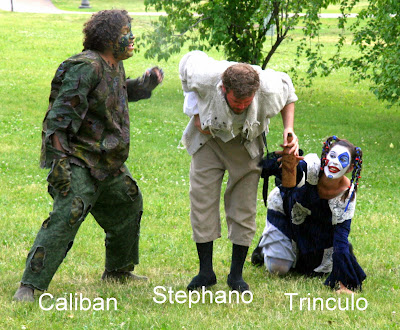 We had a great time with the Cromulent Shakespeare Company, if you have the chance to see them, please go. They're free, but do give them a little money; even Shakespeare needs to get paid.
Posted by Carsonist at 12:44 PM 3 comments:

It's good to be done with this episode. This business needed to be said, whether it's entertaining or not. You can find it directly here.

Here's an insider preview: The complete document for the podcast! You can see what we skipped and what we kept, and use the links provided to see our sources.

Our next episode is about The Tempest. I hope you listen!

Here's the Link for the Stratford Monument

PS. We're on iTunes now, so definitely go there, subscribe, and rate us up!
Posted by Carsonist at 6:00 PM 6 comments:

Episode 3 is up; you can access it here! This one is the true test of the podcast, as so many of our episodes will be about a specific play. This one, more than any other, needs comments and criticism from our audience, so please give feedback.

We also have a new icon: 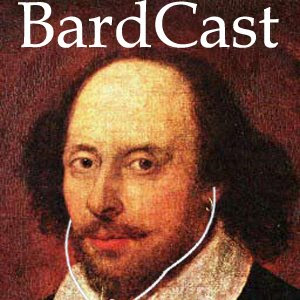 Many of us thought it would never happen, but the Bardcast has reached the big 2.0! That's right, episode 2 is available for your listening pleasure Here.

Shownotes:
El Dawg was kind enough to send us the final link, you can visit his El Blawg here.
Posted by Carsonist at 7:44 AM 2 comments:

It's been a long time coming, but the first episode of the BardCast is now available to the public! Please listen and tell us what you think. (Click Here for the MP3)

We recorded the first episode of the podcast, and I hope to have it up tomorrow. You could vote for the first special subject we cover on the left, if you wanted to.
Posted by Carsonist at 11:19 PM 4 comments: 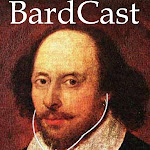